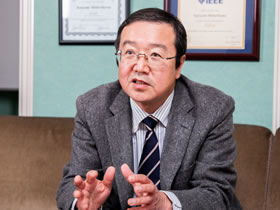 Opening up new horizons with
photonics

RIKEN Center for Advanced Photonics (RAP) is helping to realize the dream of making the invisible visible. As one example, stroboscopes, which allow us to see high-speed phenomena by pulsing light in a short duration, cannot catch the movements of molecules or atoms because they simply move too fast. However, thanks to research in photonics, lasers developed to generate pulses at even shorter duration such as 10-15 second (1 femtosecond) or 10-18 second (1 attosecond) now allow us to see the movements of molecules or atoms.

Electron microscopy makes it possible for us to observe objects at extremely high resolution. However it requires the specimen to be put in a vacuum, making it impossible to see living cells. Using an optical microscope opens up that possibility. It was generally thought that it was impossible to picture objects smaller than half of the wavelength of light in the visible spectrum, but the super-resolution microscopes break this barrier and allow us to access the nanoworld.

We sometimes need to inspect the inner structure of a device or look for contamination in foods without destroying a sample. Terahertz wave makes this possible. Terahertz wave, which has been called the “unexplored spectrum of light,” is now moving into the application phase thanks to advances in light sources and detectors.

In addition, applications in the field of photonics are expanding in areas such as light wave manipulation with metamaterials, environmental monitoring using fluorescent proteins, relativistic geodesy using ultra precision optical lattice clocks, all making visible what nobody has ever seen before. Being able to see objects helps us to understand and manipulate them.

The work of the Center for Advanced Photonics focuses not simply on making discoveries that will be recognized by the research community, but rather on contributing to society by developing practical applications of advanced photonics.

The possibilities opened by photonics are expanding. We are still in the very early stage of this new revolution.

RIKEN Center for Advanced Photonics is committed to expanding the horizons of photon science.

OrganizationRIKEN Center for Advanced Photonics is composed of Four groups.

PublicationsPamphlets and other publications in PDF are available here.